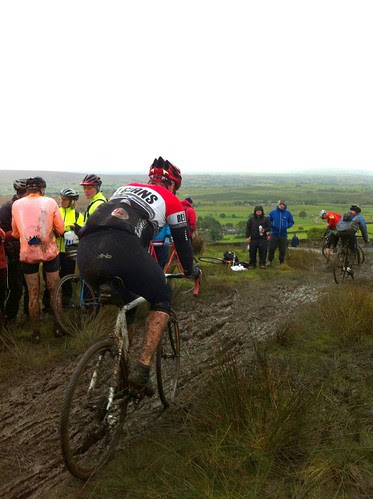 The fact it has taken so long to get around to writing this blog probably speaks for itself;  This years event is one I have been trying to put out of my mind, the weather was horrendous and I did my worst ever time.  I used to think that I am usually pretty good in bad conditions and I set off in reasonable shape and feeling strong, getting over Ingleborough in reasonable time, despite the high winds wafting my bike around like a sail on Rawnsley's Leap.  The ride up to Chapel-le-Dale saw me in good spirits, conned by the tail wind.  But as I crested the whaleback of the Whern' it all fell apart.  The near-sleet and hail got through my lycra and the cold started to eat into me.  I should have wore more clothes.  On top of that, my usual confident descending was ruined because I realised my 'new' brake blocks had scrubbed away to metal.  Consequently I fell a couple of nasty times - shaken bad - and that combined with the cold, gave me 'the knock'.  Glad to see the faithful family support team for some sustenance at Ribblehead, I cycled on towards Horton, but I was really broken at this point, fight over.  I have never felt so compelled to miss out Pen y ghent as I have this year, but of course I did not.  I stopped off on the way up the lane to have a swim in the new pool that had formed, as well as turn around my brake blocks (in order to eek out the last bits of life, slightly futile...). After an eventless trudge to the top and a hairy ride/run down (I pride myself in previous years riding from the summit to the bottom 'clean', no chance this year, some carrying down hill too!).  Made it back (after another swim - more a bath this time, so dirty...).  Straight home, bath (again), beer.  Can't say I've looked at my bike since.  This year really beat me.  Next year?  I've started training in the swimming pool already.


Summary of my event times over the years:

Posted by The Haygarth Family at Sunday, October 07, 2012